Back to Concerns / Acne 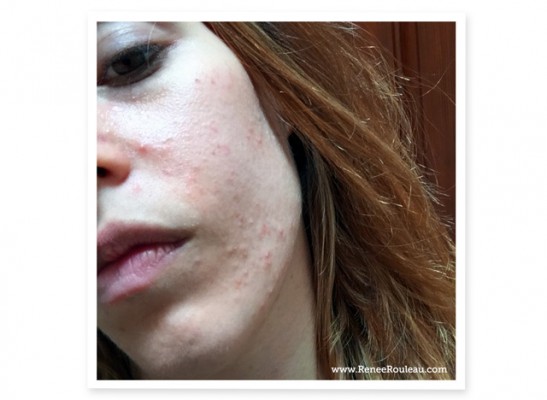 When it comes to acne, the most common question I’m asked from my clients is, “What is causing me to get blemishes?” It’s only normal to want to know why at times your skin will be clear and then for what appears to be no reason at all, you’ll get an increase of breakouts. If you eat fairly healthy and use good quality products formulated for your skin type, you might simply chalk it up to stress and hormones because you just don’t have the knowledge of what else it could be.Part of my job as an esthetician is to try to help my clients determine if there is a tangible cause for their breakouts—something that we can isolate and finally find the true reason. But unfortunately, this is just not easy because every person’s body chemistry, the type of bacteria their breakouts have, their lifestyle, genetics (and so much more!) are all vastly different. There is simply not a one-size-fits-all solution.

This story I’m sharing is about how one of my clients (I’ll change her name to Amy for this post) found out the true cause of her breakouts—and one that I have never even heard of before. Here goes.

Amy is an actress in Los Angeles and I’ve given her facial treatments every few months for the last few years. While her skin has responded very well to the professional facial treatments and skin care products I have given her (she’s a skin type #2), there have been occasional times I have seen her skin not look its best.

The problem: Over the course of the past several years, Amy would experience occasional times of tremendous breakouts that would appear suddenly and take over a large portion of her face and jawline, and then settle down and go away after a few days. Unlike normal acne that stays pretty consistent with frequent blemishes appearing daily or weekly, this came in spurts with her skin being perfectly clear in between episodes.

Especially this past six months, when her breakout episodes were appearing more frequently (going from every few months to every 3-4 weeks), she was determined to get to the bottom of it.

The appearance: Red, pustular type blemishes that come to the surface with a visible whitehead. (They never itched so it wasn’t appearing as a normal allergic reaction.)

Here are 9 things she did to finally determine the cause.

1. Eliminate dairy. We thought that maybe dairy could be a cause, as it is for so many people, but this didn’t appear to be the case when breakouts would still appear after she had eliminated it from her diet.

2. Modify her hair products and shower routine. She cut out using SLS (Sodium Lauryl Sulfate), an irritating detergent used in shampoos, and panthenol, a potential pore-clogging ingredient found in conditioner. In addition, I had her perform her shampoo and condition routine first, and then wash her face and body last to ensure any hair product residue was cleaned off. I also had her pull her hair back in a ponytail when she slept to keep it off her face and neck when she slept. This didn’t seem to be the solution, but it’s still a good practice to do.

3. Change up her bedding. She thought maybe it could be that her pillow or blanket is resting on her face for eight hours a night, so she invested in new pillows, sheets and a duvet. This didn’t seem to help, as she would still have her eruptions of blemishes.

4. Change up her skin care routine. I modified a few things in her routine to make it a bit more acne focused by having her use AHA/BHA Deep Pore Cleanser, but I only did it slightly so as not to dry her out. The challenge with creating her skin care regimen is that her breakout episodes didn’t happen too often so it wasn’t like she was struggling with them on a daily basis like most people with acne do. However, making her routine more antibacterial by using gentle, non-drying products with salicylic acid would still be beneficial.

5. See a dermatologist. She decided to make an appointment with a dermatologist to see if they could offer any solutions. Her doctor diagnosed her with basic acne (she visited him during one of her times of breakouts) and gave her the usual treatment of oral antibiotics and topical creams to heal it up. Her instinct told her this was more of a reaction to something since it didn’t happen often, but he was convinced it was just regular acne that people get. She tried the medications but soon after went off of them when she discovered what she found to be the cause. (More on that below.)

6. Eliminate the use of makeup sponges. When Amy would get her makeup done while filming for TV or a movie, she noticed that within a few hours (yes, literally hours) after the makeup was applied, her breakouts would start to appear. She thought it was from the latex used in the sponge (since many people have an allergy to this), so she no longer had them use a sponge. (She’ll later determine that latex was not the issue with the sponge, but something else was.)

7. See a naturopathic doctor. She went through a series of diagnostic tests that included checking hormone levels and food sensitivities by way of a blood test. Her hormone levels came back as normal but it was discovered that there were seven different foods that she showed a moderate or high sensitivity to. Roasted almonds, roasted peanuts and seaweed were high on the list and basil, cilantro, peaches and nectarines were a bit lower. She eliminated all of these foods from her diet for three weeks but she got a bad breakout episode during this time so these foods clearly weren’t the cause after all. They also did a test for latex and confirmed that she didn’t have an allergy to it.

8. Determine if there is a pattern to when these breakouts occur. I always use the expression “detective work” because you really have to be a detective when you’re trying to figure out the potential causes of your breakouts. It’s not a simple thing to do but Amy noticed that the breakouts seemed to appear whenever her boyfriend would come back from out of town. Amy and her boyfriend are both actors and travel a lot for work and she was always telling him, “My skin is so nice and clear when you’re gone, and every time you get home it gets bad again.” (Hmmm…we might be on to something here.)

9. Get on Google to see what she can find. She spent a few hours on Google searching “face reactions”, “skin reactions”, “acne rashes” etc.) and stumbled across some information about someone who had a similar experience to hers and had found out what it was. This was all finally making sense now!!!

The cause: Her breakouts were chemical contact dermatitis caused from bleach and/or the fumes given off from bleach. In an effort to have the house be nice and clean before her boyfriend would come back in town, she would clean up their kitchen and bathroom by spraying everything with a mixture of equal parts bleach and water and wiping it down with a cloth. And then her post-cleaning breakouts would start to occur when he came home! (Note: She always would get a massive headache and a dry throat for the rest of the day after using bleach. She didn’t really mind as long as her kitchen was clean and her sinks were nice and white. But clearly, her body wasn’t reacting well to this ingredient.) So wait, are you thinking, why would she get an eruption of breakouts on her face when she cleaned with bleach? Well, the theory is that it was from the fumes were directed towards her face and/or the bleach would get on her hands (despite washing her hands very well after using it) and without realizing it, she would touch her face, as everyone unknowingly does throughout the day.

As for the makeup sponges, she read online that in the process of making them, they are soaked in bleach. So, of course, when directly used on her face, this only made sense that she would have a negative reaction.

Update: It’s been three months since her last episode of breakouts and she’s enjoying her newfound clear and beautiful skin. She no longer has makeup artists use makeup sponges on her skin and she still gives her house a deep cleaning but uses only bleach-free cleaners. As for the seven foods that they determined she had a sensitivity to, she eats them regularly as she had never had any issues with her skin or body when she ate them. (I guess food allergy testing isn’t always an indication that your body can’t tolerate them.) She had a routine follow up appointment with her dermatologist and shared with him how she believes that bleach was the cause. He said it was nonsense and was adamant that she simply had acne. They even kind of got in an argument about it! Ha! Clearly, this doctor is not someone who is open minded.

As an experienced esthetician, I personally had never encountered anyone ever having a known reaction to bleach, so this one was a first for me. But what I know for sure, is that your skin acts as an excretory system to get rid of substances that it’s not in agreement with and that there’s always something to learn in the wild, wild world of skincare!

Her advice: Follow your instincts—no matter what anyone says. You know your body the best. If something doesn’t seem right, there is probably something else going on. Be patient and open-minded and don’t give up.

So, who is this beautiful Amy with gorgeous clear skin? You can see her here.

Thank you to “Amy” for letting me share her story with my readers. It’s bound to help someone out there!

Which skin care products are best for you? See our nine skin types or take the Skin Type Quiz and get products recommended.

Need expert advice from a licensed esthetician? Schedule a virtual consultation to get customized advice in person, over the phone or online via Skype or FaceTime.For more expert advice check out the blog. Also sign up for our skin tip e-newsletter, follow Renée Rouleau on Twitter and Instagram and join the discussion on our Facebook page. You’ll be your own skin care expert in no time. Get the #ReneeRouleauGlow!