Back to Routines / Seasonal 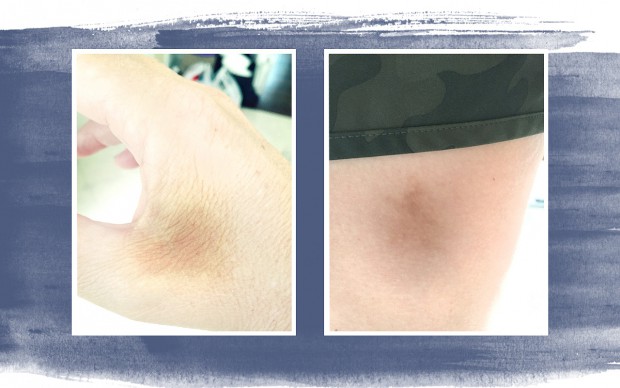 Updated 6/30/20. As an esthetician with over thirty years of hands-on experience, I thought I had encountered almost every skin condition and issue on the planet, whether it’s on myself or seeing it with my clients. But about five summers ago, I personally experienced something I had never even seen or even heard of before. It’s a skin condition called phytophotodermatitis that caused me to form an unusual brown spot. Let me first give you the back story—as it’s a funny one.

I went to my annual best girlfriend’s trip to Nantucket and as always, my friends drill me for free advice on how to best care for their skin. One of my friends showed me this area on her hand between her thumb and forefinger that had brown discoloration. She said she didn’t do anything to that area of her hand and just showed up one day which was four weeks prior. It had only faded ever so slightly in the four weeks and she had no idea what it was — and neither did I.

At the end of the weekend, I flew back to Austin and noticed that I now had a brown spot of discoloration on my thigh. It was very similar to what my friend had on her hand. “What was this?” I thought. “Did I catch some strange disease from my girlfriend’s hand that transferred to my leg?!” (The photo above shows my friend’s hand on the left and my thigh on the right.)

After a few weeks, the spot on my leg really hadn’t faded much, so decided to meet up with a dermatologist friend of mine to get her assessment. She took one look and immediately said, “You must have gotten lime or lemon juice on your leg and then went in the sun.” What? I had never even heard of such a thing. I thought back to when it appeared and realized it was right after I got back from Nantucket, where I spent a few days at the beach in direct sunlight drinking water with lemons. At some point, I must have squeezed the lemons into my water with my hands and wiped my leg. Crazy!

I called my girlfriend to share the news and to see if this made any sense regarding her own hand. Lo and behold, it sure did. She had a few tequila shots while out in the sun, and she noticed the discoloration on her hand the morning after. For those who don’t know, when doing tequila shots, you first lick the area between your thumb and forefinger. Then, you sprinkle salt on that area, drink the shot, and bite into a fresh lime wedge.

With all the fresh lime juice in her mouth, my friend licked her hand again and took a second shot. This transferred the lime juice that was in her mouth from her tongue to her hand. While she was out in the sun later, this is what pigmented her skin. Not only did she wake up the next morning with discoloration on her hand—but with a big headache, too!

Phytophotodermatitis is a condition in which the chemicals in citrus fruits (limes, lemons, and even celery), cause a chemical reaction on the skin when it interacts with UV sunlight. It’s also called “lime disease” (not to be confused with Lyme Disease). The result can be blistering and burns, but in mild cases like ours, will simply form brown pigment. The spots eventually fade on their own but can linger for many, many months.

The remedy I used on my leg and the one I recommended for her hand was products that simply treat brown spots, just like any other brown spot that someone would get —regardless of the cause. We both used Vitamin C&E Treatment, a stable, no-sting vitamin C serum with melanin-suppressing properties as well as these 7 ways to get rid of sun spots. For both of us, it took about four months to fade.

So there you have it. You learn something new every day. I know I did!

Celebrity Esthetician & Skincare Expert
As an esthetician trained in cosmetic chemistry, Renée Rouleau has spent 30 years researching skin, educating her audience, and building an award-winning line of products. Trusted by celebrities, editors, bloggers, and skincare obsessives around the globe, her vast real-world knowledge and constant research are why Marie Claire calls her “the most passionate skin practitioner we know.”