Back to Most Popular Posts 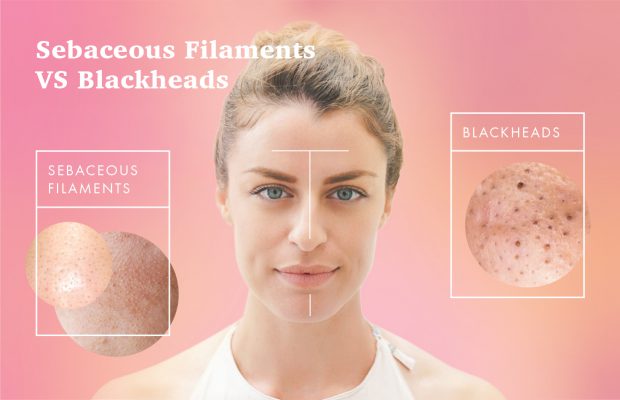 Updated 03/23/22. When you pull the skin on your chin taut, do you see a cluster of tiny, white dots under your lower lip? What about in the folds of your nose? Do you have small, greyish dots on your nose that seem impossible to get rid of? If you answered yes to any of these, you probably have sebaceous filaments.

Sebaceous filaments are totally normal. In fact, almost everyone has them. Even though they’re often mistaken for blackheads (especially on the nose), they shouldn’t necessarily be addressed the same way. Keep reading to learn more, including what they are and how to get rid of them!

What Are Sebaceous Filaments?

Sebaceous filaments are naturally-occurring, tube-like structures that line the walls of your pores. Their purpose is to direct oil flow. Your skin produces oil (also known as sebum) in order to protect and moisturize itself. Sebaceous filaments help guide that oil from your sebaceous glands, where the oil is produced, to the surface of your skin where the oil can get to work fighting environmental aggressors and dehydration.

For the most part, sebaceous filaments aren’t really visible to the naked eye. But when you have an overproduction of sebum in your skin, the oil can build up and start to harden until it eventually stretches the pore and starts to “spill out” (I promise, it’s not as gross as it sounds!). This is when they start to become visible.

Where Do You Get Them and What Do They Look Like?

Since sebaceous filaments are associated with oil production, they show up in areas where we naturally produce a lot of oil (think t-zone). Specifically, on and around the nose, and on the chin under the lower lip. They also tend to form in the creases and folds of our skin since oil accumulates here.

Sebaceous filaments vary in color. They can be grey, yellowish, or white. When on the nose, they are usually light or dark grey, which is why they often get confused for blackheads. But when they’re found around the edges of the nose (especially in the folds where your nose meets your cheeks) or on the chin, they’re more likely to be white or yellowish.

Sebaceous filaments are named for their shape and come out looking like just that—a filament. If you squeeze them (which you shouldn’t, more on that later), they come out as a thin tube or strand.

So, what exactly is the difference between blackheads and sebaceous filaments?

Another important distinction is that, unlike blackheads, sebaceous filaments are not technically comedones (clogged pores). Comedones are the precursors to acne breakouts, whereas sebaceous filaments don’t really turn into pimples unless you mess with them. This is because they don’t fully block pores the way comedones do; instead, the buildup coats the walls of your pores leaving the center more or less open. That said, if you have acne-prone skin, you’re more prone to sebaceous filaments because you produce a lot of oil.

Read: How to Safely Extract Blackheads and Clogged Pores From Your Skin

Before I address how to get rid of sebaceous filaments, let me just say that having them is completely normal! Since they’re part of the natural structure of our skin, almost everyone has them to an extent. Thanks to photoshop, we might not think this is the case, but trust me—it is.

It’s also important to know that even if you extract or squeeze sebaceous filaments, they’ll fill up again within thirty days. There is really no way to permanently get rid of them. That said if you have a lot of them and they bug you, there are ways to minimize their appearance and prevent further formation.

Which Ingredients Should I Use?

These are hands-down the best products and ingredients for minimizing sebaceous filaments.

Retinol and retinoids can also be really effective against sebaceous filaments. They increase the rate of cell turnover, which helps keep dead skin cells from getting stuck in your pores. This, in turn, helps regulate oil flow and prevents sebum from building up and hardening. Retinol is a powerful ingredient, so if you’re new to it be sure to check out the Beginner’s Guide to Retinol and Retinoids before diving in.

Don’t discount the power of a physical scrub. A gentle, mechanical action can be super effective at sloughing off filaments so they’re less noticeable. Just be sure to select a gentle scrub with smooth, rounded beads. This will prevent any damage or scratching to the skin.

Finally, be sure to keep your skin well-hydrated using an oil-free moisturizer. While salicylic acid and retinol are amazing for keeping pores clear, they have the potential to dry out your skin. If sebaceous filaments are a concern, this is the last thing you want. Having dry, dead cells on the surface of your skin will keep oil trapped underneath. This causes it to build up inside your pores, potentially making sebaceous filaments worse (not to mention they’ll appear more visible if the surrounding skin is dehydrated).

It’s always important to choose the right moisturizer for your skin type.

Should I Try to Extract Sebaceous Filaments?

Tempting as it may be, it’s really best to avoid extracting or squeezing sebaceous filaments. As I mentioned, you can never truly get rid of them this way. So while you might get some instant gratification, it won’t do you any favors in the long run. In fact, by squeezing your skin you risk pushing oil and bacteria deeper into the pore. This could cause an infection and lead to a full-on breakout. Squeezing at the skin too much can also lead to bruising, or worse, scarring.

If you really want your sebaceous filaments extracted, go see an esthetician. They might start with a BHA chemical peel to dissolve dead skin cells and oil buildup, which will make extractions easier. Your filaments will still fill up again within thirty days, but putting yourself in the hands of a professional greatly reduces the risk of damaging your skin.